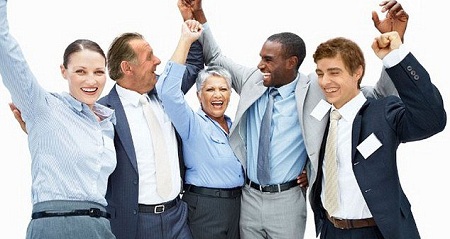 QUESTION: Describe an important experience in your life.

I was born in Ukraine and grew up in a communist society. Just like every school kid I was a member of the "Young Pioneer" organization, read books about the October Revolution and sang praises to the Second World War heroes. I was eager to show my respects to adults and the authorities. I liked my school very much and enjoyed going there. I always got good grades, didn't fight with the teachers, was the class speaker, and participated avidly in all social activities of a Young Pioneer. To sum it up, I was a good girl ... until I became a rebel.

The cause of my rebellion: the school uniform. Every Soviet boy and girl had to wear the uniform to school. No exceptions. Boys wore a brown suit, and girls a brown dress with an apron. An everyday apron was black, for special occasions there was a white one. On top of that, every Young Pioneer had to wear a red triangular neckerchief.

Most kids had just one set of uniform, only a few families could afford to have two. It was not such a big deal for boys, at least they could always wear a clean shirt. But for girls it meant the same long-sleeve woolen dress every day of the week, rain or shine, sun or snow. The only elements of the dress we had to change regularly were white collar and cuffs. In the summer for instance we had to suffer in these same awfully warm dresses the whole week long. Even now the thought of it is disgusting, but at that time I had no choice.

The uniform concept was based on the overruling ideology of that time: equality. Equality in well-being, equality in behavior, equality in thinking. But this forced equality meant actually sameness, uniformity. We were not supposed to be different fr om the others. The uniform was thought to prevent jealousy, competitiveness and class envy. Every school kid had the same dress no matter how rich or poor his family was. Besides, kids did not have to spend time every morning deciding what to wear to school.

Although these reasons did make some sense, I still could not accept them. I thought there were many more "contra"s than "pro"s. First of all, the uniform did not bring the desired equality. One could always show off with accessories: coats, shoes, school bags, sportswear, watches, barrettes, pens - the list was very long. Since accessories were the only way of differentiation, they were very important and attracted a lot of attention. Secondly, the uniform was quite uncomfortable and very unhygienic. As I said, we had to wear the same dress every day. Then, it just didn't look nice and left no possibility to wear something which flattered one's figure (concealing the less good looking parts of it). Finally, it prevented the development of one's esthetic taste. All in all I had to were an ugly, uncomfortable and unhygienic dress against my will, which felt like suppression of personal freedom.

In the mid 80's the Soviet society began to change. The Soviet people started to dare to think beyond the permitted lim its, and the world was getting excited about "perestroika". I dared, too. I started to argue with my history teacher and expressed loudly my opinion about the school uniform.

I was not the only one who wanted to abolish the uniform. The vast majority of the students didn't want to wear it any longer. In the beginning we just had long arguments with our teachers and the school administration, which however didn't change the situation much. So we took actions.

For any rebellion you have to excite the masses first. My active Young Pioneer and class speaker role gave me the possibility to do some propaganda work in order to convince as many as possible of our ideas and to awaken the revolutionary spirit. The anti-uniform idea spread like fire.

The next step was to get the school administration's attention to this issue. They knew we didn't want to wear the uniform but nothing motivated them to do anything about it. We wrote down our demands and started collecting signatures of the students for the abolition of the school uniform. The whole week long we spent every break in the corridors, on the stairs, explaining our reasons and goals to schoolmates and teachers, and collecting signatures. At the end a great part of the students signed the petition which we presented to our school administration.

We were very happy about the number of signatures and expected great changes. But as days passed nothing came out of it, all of our efforts for nothing? Obviously several pages filled with signatures did not bother them much! We had to look for another way to force the administration to take our demands seriously.

So we decided to call a strike. The participants disobeyed the rules and came to school wearing casual dresses to provoke the administration. We didn't have to wait long as we were not admitted to any of the lectures, and had to stay out of the classes. To intensify the effects of our strike, we sat on the ground along the corridor just next to the principal's office... This obviously exhausted his patience and he called the "guilty" ones (the organizers of the strike) to his office. Finally we had the chance to discuss it with him seriously.

I don't remember which punishment we're dealt with for the strike and public disturbance. That was just the price of our victory! No, the uniform was not abolished immediately for good. But we were given a permission to try out an experiment: the older students were allowed to come to school without the uniform for two weeks.

The experiment turned out to be a great success. First of all, almost everyone used this right. Secondly, the impact of the casual dresses on the students' discipline was positive. As expected, the absence of the uniform caused neither chaos nor rivalry. We were just happy to be free! We enjoyed wearing jeans and t-shirts instead of the nun-looking dresses.

Unfortunately, two weeks later the experiment was over and despite the encouraging results we had to go back to the uniform. But our efforts were not useless, we achieved the first results and showed our schoolmates the freedom that we were fighting for.

Just one more remark at the end of this story: During my last school year I did not have to wear a school uniform at all...